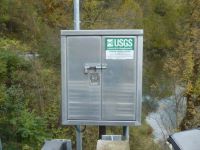 STATION.--01573160 QUITTAPAHILLA CREEK NEAR BELLEGROVE, PA
LOCATION.--Lat 40`20'33.4", long 76`33'42.8", Lebanon County, Hydrologic Unit, 02050305, on upstream side of bridge over Quittapahilla Creek on Palmyra-Bellegrove Road (SR 4008) , 0.7 mi Killinger Creek, 1.8 mi south of Bellegrove.
DRAINAGE AREA.--74.2 square miles.
PERIOD OF RECORD.--Non-recording gage, October 2002 to September 2009. Continuous recording gage, October 1975 to September 1994, September 2012 to current year.
GAGE.--Water-stage recorder and crest-stage gage. Datum of gage is 361.88 ft above National Geodetic Vertical Datum of 1929.
REMARKS.--Some regulation by Millard Quarry 0.7 mi upstream. At a minimum groundwater seepage and some surface water is pumped from the quarry into the stream. Cities of Lebanon, Annville, and Palmyra effluent discharge enters the stream at various points above the gage. Flows are not adjusted due to uncertainty of figures.
COOPERATION.--Station established and maintained by the U.S. Geological Survey in cooperation with the U.S. Environmental Protection Agency.
GAGE HEIGHTS OF IMPORTANCE.--
Supplied by USGS.-- Data transmitter operational limit: 25.6 ft.
This station managed by the PAWSC New Cumberland Office.