Site Information
LOCATION.--Lat 43°12'19.3", long 76°13'04.0" referenced to North American Datum of 1983, Oswego County, NY, Hydrologic Unit 04140202, on right bank 50 ft downstream from bridge on Morgan Road, 1.3 mi north of Euclid, 7.7 mi upstream from mouth at Three Rivers, and 9.2 mi downstream from Oneida Lake.
DRAINAGE AREA.--1,439 mi².
PERIOD OF RECORD.--September 1902 to December 1909, November 1996 to current year. Records for January 1910 to December 1912 and October 1947 to September 1998, published as "Oneida River at Caughdenoy" (station 04246500), at site about 6 mi upstream, are not equivalent because of regulation between sites.
GAGE.--Acoustic velocity meter and water-stage recorder. Datum of gage is 360.00 ft above NGVD of 1929 and 359.41 ft above NAVD of 1988. Prior to Apr. 1, 2019, datum of gage was NGVD of 1929.
COOPERATION.--Records of gate openings, lockages, and elevations of water surface in Erie (Barge) Canal above and below Lock 23, provided by New York State Canal Corporation.
REMARKS.--Considerable seasonal regulation by operation of gates in Oneida River and Erie (Barge) Canal with a large amount of natural storage in Oneida Lake. Water may be received from Mohawk River basin through summit level of Erie (Barge) Canal between New London and Rome. Nearly all of flow from 14 mi² of Tioughnioga River basin may be diverted into De Ruyter Reservoir, in Oswego River basin.
Water Years 2014-20: Records good except those for estimated daily discharges, which are fair.
EXTREMES FOR PERIOD OF RECORD.--Maximum daily discharge, 10,600 ft³/s, May 1, 2011; minimum daily discharge, -52 ft³/s, June 1, 2006. Maximum and minimum instantaneous discharges not determined. 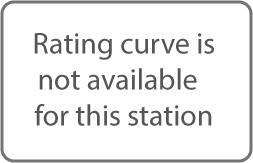 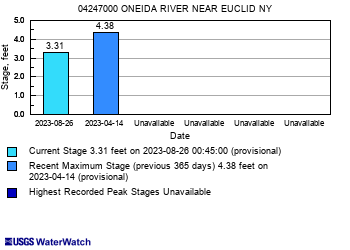