USGS - Cooperative Matching Funds
ATTENTION!!! Please be aware that the sharp rises and drops in the graphs displayed for some of the Allegheny River gages are being caused by hydroelectric power producers passing relatively large amounts of streamflow. 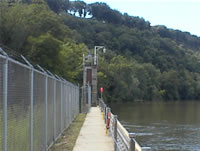