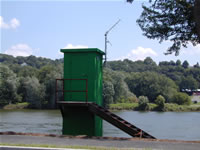 This station managed by the PAWSC Williamsport Field Office.